Fanatic Omes:
Now that Nole has lost, I feel bad and love him once again. Awww. Just one win from tieing the McEnroe winning streak record and becoming the world number 1. Bum out. Ah well, he's had an unbelievable one and there's no doubt that he'll be talked about in the same breath as Rog and Raf from here on in. Idemo Nole!
Posted by Omes at 21:02 0 comments

Neutral/Fanatic Omes:
No time to do a preview post of the women's final, but this pretty much says it all nicely. Very nicely indeed.
Posted by Omes at 19:43 0 comments

Happy Birthday Rafa!!! - Here's to being gifted with a mauling of our favourtie Scot!!!
Now here's a little present for us:

The Semi-Final of Dreams 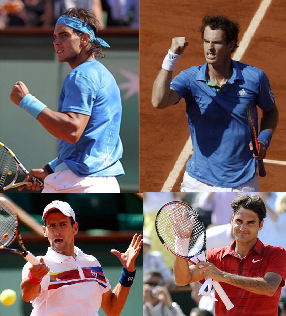 
Roland Garros this year has looked the most competitive it has been for the last five years or so. Only fitting then that the best competitors – the best four in the world, have pulled through. With doubt being raised over the resident King of Clay’s dominance this year, the other rivals are surely feelinng that the crown is more within their reach than it ever has been; and are therefore looking to grab the bull (aka Nadal) by the horns.


Don’t take my word for it. Just ask them:


Andy Murray has shown grit and determination all tournament even in the face of injury; fighting time and time again from break points down to close out matches, and now has made his first ever Roland Garros semi-final. He hasn’t come all this way just to be satisfied with getting to this point, and has the self-belief to pass the ultimate test in Nadal and go even further.


"For me, the plan is trying to get a step further and into the final of the French Open.” - Federer


Roger Federer has looked in impervious form all through this tournament and remains the only semi-finalist not to have dropped a set. He’s looking to get his revenge on Novak Djokovic who he has lost to three times this year, but the 16 time Grand Slam champion no doubt relishes the challenge.


What more can be said about 2011’s champion, Novak Djokovic? Winning against Federer would not only give the Serb his much coveted world no. 1 ranking, but would see him equal John McEnroe’s 42-match undefeated streak from the start of a season. And insistent that his recent four-day break hasn’t interrupted his rhythm, he most certainly has the confidence and form to do so.


Nadal has regained his confidence after an emphatic dismissal of Soderling his quarter-final match. The Spaniard was much happier with the form and attitude, but remains ever modest, understanding the difficult road that lies between him and victory. There is no doubt however that he will give it his absolute all in order to re-assert his authority on clay; and for any opponent that is a scary proposition.
Click "Read more" to view my silly, but unashamed thoughts.
Read more »
Posted by Omes at 20:25 0 comments

Justin Gimelstob on WhoSay
Posted by Omes at 15:26 0 comments 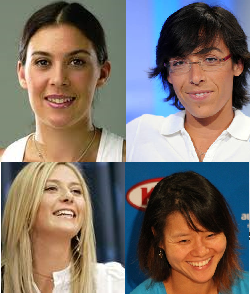 It’s the semis y’all! On the women’s end; we basically have the equal and exact opposite, but equally exciting happenings of the men. Having said that both batches of semis sum up their respective associations (WTA and ATP) pretty well. Inconsistency (yet competitiveness) for the ladies and dominance for the men.


So we have the first Chinese woman to do lots of things – the resilient and awesome Li Na who’s match is being showed instead of ping pong back in China. Big deal guys, big deal. She will play Sharapova + Sharapova’s shoulder who are bullying their opponents at the moment and have to be the favourite for this thing now. (Right? Righttt?).


Then there’s the, let’s call her – eccentric, Marion Bartolli who fought off some tough competition to seize her place here, versus the reigning champion Schiavone who always shows so much heart that she could make the Care Bears feel ashamed of themselves.

Murray's Roland Garros - in His Own Words

(Pic: clbuzz.com)
The Muzzard talks about his rollercoaster ride to the semis.