Why Rafa's fans should smile 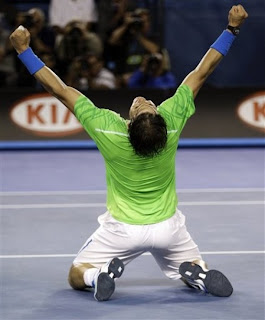 Vika takes it all 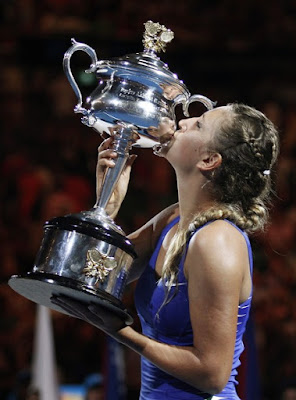 Neutral Omes:
It was an unsurprisingly nervy start from Vika, broken in her first service game by Maria. For those few minutes it looked like a case of "well done for making it to the final, Vika, but the stage is too big for you". Besides, in this particular case the last person you want to see opposite you is Maria. But when Vika finally did get on the board, the nerves disappeared and I don't think anyone was prepared for the way she was going to take it to Maria. From then on the Belarussian, never looked back.


Both women have similar game styles, looking to be the aggressor all the time – all shots were attempted winners, but Vika's landed in more often than Maria's. And with a 71% break point conversion, she clearly took every opportunity.
Vika has been the form player throughout the tournament, blitzing everything and everyone in her path early on, and when adversity was thrown at her - in the form of Radwanska, she held her cool. Her semi-final against Clijsters was another turning point - after a roller-coaster of a match, she took control of her nerves to serve out the win - it was here that she showed she had what it takes mentally. 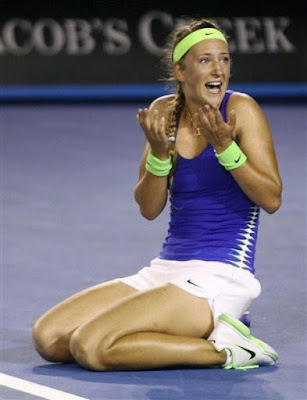 That mental temperament was there for the final– the occasion didn’t phase her. And when your mind shows up your body follows. It was almost surprising just how sharp she was (her off-court work clearly paid off) – moving Maria around, playing with variety and dictating everything. Like it wasn't her maiden Slam final and it wasn't Maria Sharapova at the other side of the net.  It must be said it wasn’t Maria's day, but Vika took advantage of that and played her into submission and failure. She took Maria's game away, and in that 2nd set, she took Maria's games away.
When Maria netted that final ball, Vika sank to her knees in disbelief, coming to the realization that she actually has what it takes to win a Slam. And with her first major title and being crowned the new number 1, she’s taken it all.
(Pic: AP)
Posted by Omes at 00:18 0 comments