Fanatic Omes:
I'm going to make this quick as I am quivering at the thought of the final, I can hardly keep my food down, much less type.
Fedal Fireworks
What can I say? Rafa DEF has his swagger back. He was unpredictable changed direction of the ball nicely - something he was majorly lacking at then end of last year, no? His mind was there in the clutch moments. And hello passing shots! (See video above.) Roger was always there but his ball found the net far too often at far too important moments. He did everything right, but when your guy hits a frankly ridonkadonk MISS-HIT lob and it lands on the baseline, break point down, only for you to smash it into the doubles alley, it's just not your day.
There was naturally some exceptional tennis from the pair of them – this wasn’t a Fedal that was over-hyped. It was thrilling, riveting and truly lived up to expectations.
Oh and SQUEEEEEEEEE.
Novandy...wait no I prefer Andak
The match started so slow, I actually aged. There seemed to be 4 players and 3 matches out there. Nole vs Nole, Andy vs Andy and Nole vs Andy. At times the match turned cray (for lack of a better word), with questionable shot selections all over the shop - we litch didn’t know what was happening – whether one or both was suffering physically and mentally or d) all of the above.
But the dreadful start was blitzed by the titanic end – there was so much tension, heart and guts. And there was no clear winner till that last game.
Andy has definitely grown - it's safe to say he's arrived mentally. What let him down was that he didn’t take his chances earlier, but he did take some and that's a step up. He is proud and so are we.
And damn you Nole. You're brilliant.
Closing remarks
It's rare and a privilege to have titanic back to back semis between the world’s best players. It was fun. Now excuse me while I check into Vomitville.
(Vid: ESPN on YouTube) 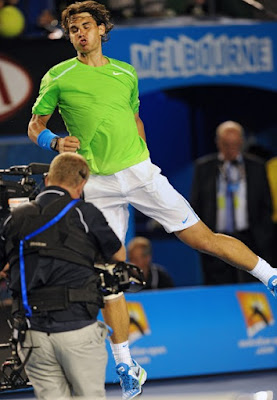 Fanatic Omes:
Lopsided quarters
With important seeds being booted out in Petra, Masha and Andy's draws, there were three cases of heavyweight/lightweight match-ups.The great thing about this? It allowed for some much coveted sleep time. Sleep is for the me.
How Rafa got his groove back
It took Tomas Berdych, a bad call from Carlos Bernardes and a lucky break in the second set to ignite el pasion in Rafa. He acknowledged he started nervous and that at times he stood "20m behind the baseline" and for a while it looked as though Tomas was going to pull off the upset. Tomas played excellently, he was so solid, error free and tactically sound for most of the match, I wanted to punch him in the face. But when Rafa's gets as animated as he did, it's tough to get past him.
Having been robbed of the 1st set (shhh, I'm a fan) but catching a break in the 2nd - it was like he was battling his 2011 demons in that moment and managed to break free of the mental prison that Novak threw him in last year. He then when on to play how he should for the next two sets- stepping up on the baseline; hitting flatter and harder. Credit to Tomas who by no means disappeared for the rest of the match, but listen to what Rafa said:
"The most important thing I had the calm".
You guys.
No. 1 no more
Kim (who's ankle thankfully held up enough) showed Caro how it's done. The defending champ just had too much game for Caro, who even Hingis, urged to "step forward". Caro remained optimistic afterwards though, remarking that time was on her side. Whether that was a dig at Kimmie or not, we'll never know. Caro's now Slamless and no. 1-less. Who knows, maybe the loss of her beloved no.1 will spark the necessary change in her game.
Ferrer's disbelief
Daveeed had us going there for a minute. With his unrelenting brand of tennis he was able to make Nole look human for the first 2 sets. He could and should have made Djokovic play at least 4 sets, but when it came to the crunch - i.e. 4-2 up in the second set tiebreak, he just didn't believe in himself nearly enough. Ferrer, please don't believe those who underestimate you.
Nole should take solace in how he played in the 3rd set - he can't afford to go for anything less when he plays Andy. (I should probably win an Obvious award for that statement).
(Pic: Getty)


Fanatic Omes:
Comeback Kim
Coming back from 4 match points down in a second set tiebreak with a rolled ankle to win a match - that's boss. Kim C managed to pull that off much to her surprise. And no doubt Li Na's as well, who was just in shear disbelief that she could throw away a match that was on her racquet. 4 times. Poor Na was unsurprisingly in hysterics in her post match presser. It's a shame - she was finally finding her form after her maiden Slam slump, only to throw such a crucial match on the stage where her career year begun. Let's hope she bounces back nicely and can once again be a force for the rest of the season.
Kimbo will go on to play Caro and I'm praying her ankle is ok, because THIS, I want to see. I'm always up for student v master scenarios. Yes I believe compared to an "on" Kim, Caro's still a student.
Rafa report
Rafa's doing good - he's still serving B52s. He's playing Mr Baby (Berdych) next which will be a step up in terms of competition/quality but I expect him to come through nicely - provided I stay up to watch the match and only take my eyes off the screen to blink and tweet. Experience tells me that you shouldn't leave Rafa unsupervised.
Tourney faves
Andy is comfortable y'all. He said so. I mean I'd be comfy if I knew I had a spot the semi-final. Not to take anything away from Nishikori - who is a fine, fine player and has pulled off a mighty fine win (more below), but we all know he's not going to trouble comfAndy. Jo Willy on the other hand could've if he didn't decide to leave his form in Doha.
Novak is still looking great. I'm not going to say much about Hewitt as I'm bitter I missed the end of what I thought would be a routine match to take a Power Pump class at the gym (bad decisions). So read this for sentimental Hewittness.
Am I seeing things, or does Nole look a little bit less impervious than his usual 2011 self - he's got to be feeling the pressure from the weight of expectation that last year gave birth to - and I think its manifesting in his game. Or is it just wishful thinking? (Rafa fan, remember). Only time will tell - I still have him as a firm favourite for this tournie though.
The student and the master
Roger showed Tomic how it was done. Tomic got a lesson in how to do it and hopefully has learned a lesson in humility. Nah, who are we kidding. Of Federer, Tomic stated:

"It's tough. I can't use my shots the I way I need them against him ... because he knows, he's a little bit smarter and he understands where I'm going to go."

See I kind of feel that as time goes by this will be the case with everyone else. Yes the beauty of thing about Tomic is that you never know what you're going to get next, but did you know that the shuffle feature on your ipod actually has a formula? Once the other players figure out Tomic's formula, he'll be just like everybody else. He's welcome to prove me wrong though. (By the way I still think he's a great player and the future of men's tennis).
Giant killers
56th ranked giant killer Ekaterina Makarova has gone ahead and slayed three fire-breathers - all in straight sets - in her run to the quarters: Kanepi, Zvonareva and fiery-est of all Serena.
Serena played in that same sluggish manner she employed at the US Open final last year. She divulged that her ankle still wasn't 100 % (said if it wasn't a Slam, she wouldn't have played; exact sentiments were: "no way"), but made no excuses for losing, acknowledging that Makarova just played better. Well done Mak, that is some feat. I'm kind of mad at you for not letting me see a Masha/Serena quarter though.
Nishikori also pulled off a stunner, beating Jo Wills in a five set thriller to make his first Slam quarter-final ever. Jo Wills was up and down, but when he was up, Kei just hit everything back. Simples. Wells done Kei. Try not to run out of steam Jo, you've been doing so well recently.
Closing remarks
I still resent Power Pump.
(Vid: tennisclipsonline on Youtube)