The Real Winners of the Davis Cup

Sure Spain beat France and Argentina beat Serbia to set up a nice Hispanic-y clash in the final. Sure Switzerland, Austria, Japan, Italy, Croatia, Canada, Russia and the Czech Republic all came through in the world group playoffs. These countries may have won their ties, but nobody won over our hearts, LOLZ and WTFs like this lot:

Rafa Nadal: For playing 3 days after losing that grueling US Open final, which must have felt like assault. Rafa had just 45 minutes to practice transitioning from hard to clay and disclosed that he was "close to the end of his energy". And he still PWNED poor Gasquet and Jo-Willy, reminding us that he is no doubt the GOATOC. (Greatest of all time on clay).

Córdoba: For making that the killer poster above (click to enlarge and read). Unless it was the thing responsible for spurring on Fer's jacket. 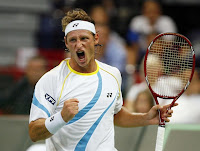 Nalbandian: For being the anchor of the Argentina. Nobody does a Davis like Daveed. He brings out his best for it and it brings out the best in him. You'd have to smile thinking about how much making this final must mean to him. But then you'd soon frown knowing that Spain will probably kick their asses. And then you'd smile again because: vamos. 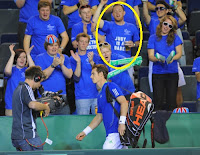 That Judy fan: For that t-shirt. Andy, this is what you get for having a cool mum.

Hewitt and Guccione: For upsetting Olympic Gold pair Stanislas and Roger, having teamed up for just the second time ever. Did you LOL? I did.

Sela: For not letting a little thing like height keep him from making his voice heard. 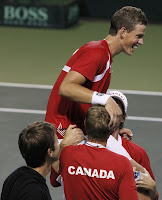 Popsicle (Vasek Pospisil): For leading Canada to victory in a stand out performance, complete with a 5 set epic against Sela, a doubles shocker with Nestor and a straight sets final over Weintraub. The 21 year old moved up a couple of ranking spots with the performance declaring it "the best moment of [his] career". And those rosy cheeks!

Nole: For going out there with a failing back and trying the best he could. It must have been tough to come crashing down on the same stage that was so integral to his unbelievable success this year. I'm sure if all his ligaments etc. had snapped so that his skeleton was only being held by his skin, and there was a way he could still play, he would have. Also a couple of points for the tears. Grown men crying gets me every time. 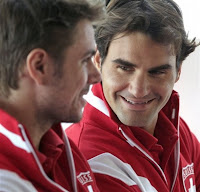 Roger: For being the tournie's class clown.

Fer: For being brave enough to don that jacket. And also for redeeming himself after his shocktastic performance with Feli in the doubles match against Tsonga and Llodra.