Let's kick the weekend off with a shirtless video of Rafa.


Fanatic Omes:
That was yummier than my breakfast. And it had berries on it.
(Vid: MLArgentina on YouTube)
Posted by Omes at 15:20 0 comments

Welcome back Serena. For real this time.

Fanatic Omes:
When Serena made her comeback at Wimbledon after almost a year off the tour and fought her way through to the second week, we were all left either rejoicing, quivering with fear, or rolling our eyes (personally I was rejoicing). This was the start of the Serena rebuttal and it was a gosh darn strong one. But when she was overpowered by Marion Bartoli in the round of 16, we were then reminded that she still had some way to go and understood that it would have been far too tall an order for her to lift that shield (- come on, the WTA field weren’t THAT hopeless). So we sat impatiently wondering where to place her form and recovery.
Fast forward to the Bank of the West Classic et voila. Serena wins her first title since Wimbledon 2010. And she passed the patience, fitness and mental strength tests to do it; not to mention making mincemeat of power-players Sharapova, Lisicki and Bartoli. Hear that? It’s the sound of the US Open smiling. (Sorry that made no sense.)

Serena revealed that prior to her injury, she liked tennis, but now, she loves it. She also divulged that she’ll start to take the non-Slam tournaments more seriously; and that my friends, is a frightful proposition. She’s back for real this time.

And thus I’d just like to take the time to say: 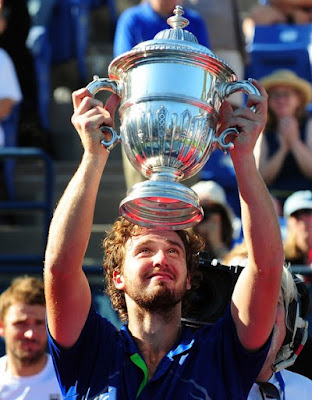 Fanatic Omes:
Ok so Ernie coming from a set down to win his second title ever (Farmers Classic) against an in form (albeit somewhat tired) Mardy Fish is definitely news. (And a mouthful to say). Maybe, just maybe our little Ernie (I say little - I’m only a few months older than the guy) has decided to half give up his partying ways, or maybe the new partnership with equally baby-faced coach Guillermo Canas is adding some zest and zing to his game, but homeboy seems to have figured out how to operate his brain on the court. And just in time for the US Open! Zoop! For those of us who observe his silliness on the tour with glee, let’s wish on a shooting star that this form is here to stay.
(Pic: Getty)
Posted by Omes at 12:39 0 comments 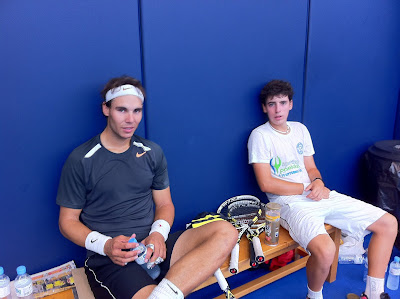 Fanatic Omes:
Rafa: "Good afternoon, today’s workout with the junior Pol Toledo was very enriching. I’ll be training hard with him in the court some more days :) Rafa"
(Pic: Rafa's facebook)
Posted by Omes at 22:06 0 comments