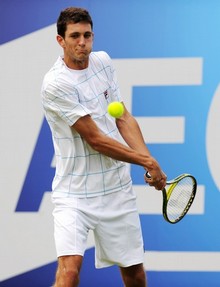 Neutral Omes:
The story of Queens so far has been world no. 216 and Britain’s no. 2 James Ward’s victory over world no. 14 and 4th seeded Swiss Stanislas Wawrinka. The Brit closed out the victory in straight sets - 76 63, after winning a convincing tiebreak 73 and using the momentum to break early in the 2nd set. Ward is currently being mentored by Argentinean mixed martial arts cage fighter, Diego Visotzky, who according to (a slightly frightened) Ward, enjoys putting his mentee in headlocks. The Brit now faces defending champion Sam Querrey and will certainly need all the fight he can muster.
Fanatic Omes:
Congrats to James Ward but doesn’t he want to go to the gym? I think all the Brit baby boys should take a page from Andy Murray’s book. Andy is a brick.
In other news, how cute is this photo?
(Pics: Getty)
Posted by Omes at 11:49